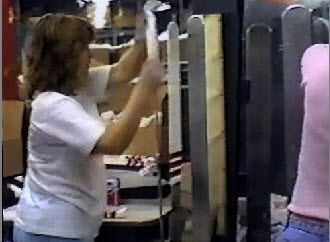 The meme I used in my last post is about doing what people think you can’t do. If you’re discouraged about something you want to do, maybe this post will provide a little encouragement.

I started working in a sock factory when I was sixteen. My plan was to earn money for college, then quit. Like John Lennon once sang, “Life is what happens while you are busy making other plans,” I ended up hanging around for a few years, seventeen to be exact, as a sock boarder, making good money for a textile worker, but dying a slow death. A supervisor once told me sock boarding separated the women from the girls, the men from the boys. He wasn’t joking. My chance to get out came when a University of Georgia Evening Classes brochure arrived in the mail. A few months later, I enrolled as a provisional student—the first step on the longest and hardest journey of my life.

Most of my classes were interesting, some were treacherous, a few as boring as a blank wall. Being a wife and mother, as well as a full-time worker, I never had enough time to study. Sometimes I woke in the morning with a textbook opened where I left off when I fell asleep, and a new round spot on the sheets in the color of whatever uncapped highlighter that fell from my hand.

There were comments made by others, often behind my back, with, “She’ll never make it,” being the most popular line. I didn’t listen to them. I kept a poem in my purse called Believe within Your Own True Self by Harold F. Mohn, and sometimes I listened to a local church’s rendition of Squire Parson’s “The Master of the Sea” while driving to and from classes. Just a little encouragement on the bad days, and there were quite a few of those.

During the eighties, UGA required students to take Physical Education courses. I signed up for a class, Body Conditioning, which I interpreted to be aerobic dancing or calisthenics. It was running, not jogging, but running. Each class, weather permitting, we ran through adjacent neighborhoods, with me lagging behind, huffing and puffing, side hurting, and stopping to hug Stop signs. Frequently, people would come out of their houses to watch us. I imagine some of their conversations went like this:

“Look at them chaps go,” said spectator one.

“That one trailing behind look likes she’s about to die,” replied spectator two.

That class didn’t end soon enough for me.

I suffered through three math classes, but made it with prayer and the help of three tutors. The only thing I remember from the most monstrous class of them all, Analytic Geometry and Calculus, was that a ‘D’ stood for Done.

My biggest hurdle came with my first required programming class. The programming logic wasn’t soaking into my brain. I had no tutors, nor did I know anybody who could program anything other than a VCR. After driving home from a particularly frustrating class, I sat in the car and had myself a good pity party. I told God I needed that class to graduate, but I was failing, big time. In tears, I begged, “Please God, I need Your help.” I knew my naysayers would laugh and say, “I told you she couldn’t do it.” Worst of all, I would disappoint my family. How could I tell Kim to go to college when I couldn’t handle it myself?

Pity party done and long story short, the next day I called a woman I knew who worked in the company’s corporate office and told her about my situation. A few days later, a programmer in our IT department helped me understand the logic in the practice program I was struggling to compile. With his help and a lot of prayer, my grades went up, and I passed the final.

Six months later, I quit working in the sock factory, so I could attend day classes and finish my degree, which I completed fifteen months later. I never boarded another pair of socks. My life-changing journey took a little over seven years.

Whatever it is you’re striving for, don’t give up. Got naysayers? Use their negativity like Red Bull to give you the energy to keep going. Run into roadblocks? Don’t be afraid to ask for help. If you have to work harder than the others, do it! Just don’t ever give up. No matter how long it takes or how hard it is, it will be worth it when you reach your goal.